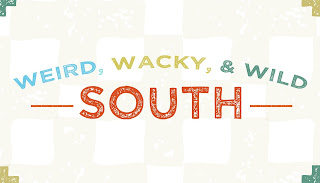 To read more of my Southern ghost stories, visit my new Weird, Wacky & Wild South blog at WeirdSouth.com, which that puts all things fun, weird and wild in one place.
Posted by Louisiana Book News at 8:47 AM No comments:

Lily at the Saint Francis Inn 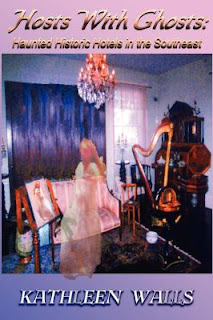 On a recent visit to St. Augustine, I had the pleasure of staying at the St. Francis Inn, considered the oldest inn in the country. Naturally, there’s a ghost story. I wasn’t lucky enough to stay in the actual haunted room where “Lily” resides, but I enjoyed a room a few steps down the hall on the third floor. While I was listening for ghosts and utilizing my Ghost Radar app, I had the equal pleasure of reading about the inn and said ghost in Kathleen Walls’ “Host With Ghosts: Haunted Historic Hotels in the Southeast.” Walls lives near St. Augustine so she’s a true expert on Florida hauntings. She graciously allowed me to reprint her ghost story on the inn from the book. Here it is:

Just around the corner from St. Augustine’s Oldest House, stands the St. Francis Inn, the city’s oldest inn. It was built by Gaspar Garcia on a lot granted to him by the King of Spain in 1791.

Now since he was a mere sergeant and would not normally have been able to afford the magnificent thick walled fortress style home, the fact that he was in charge of construction of the public buildings for the government might explain his living so far above his means. He had access to the best building materials and tools available in his day. 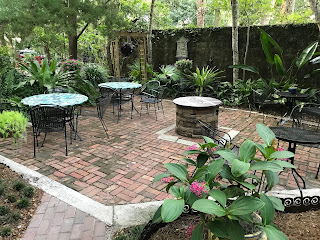 St Francis Inn has two permanent residents, Lily and her lover. Lily was a beautiful slave girl who worked in the home in the 1800’s. A young British soldier lodged in the house. The two fell hopelessly in love. They had clandestine trysts in a room on the third floor. Today it is called Lily’s room.

Since the property was built after the British occupation of the area, the affair probably took place during the ownership of Colonel Thomas Henry Dummett, since he himself was retired from Britain's Royal marines, or his daughter, Anna. She was the one who converted the family home into a lodging establishment in 1845. She raised 10 nieces and nephews in the inn, children of three of her deceased sisters. Since she was a staunch Confederate during the war and a slave owner, this is the most likely time frame for the doomed love affair. 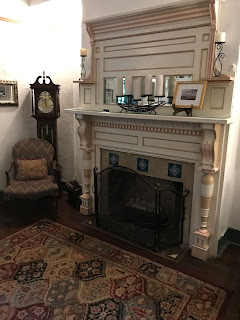 The young soldier was probably one of Anna’s nephews. The affair was discovered when Lily became pregnant. The family was able to end the affair but not Lily’s love. Rather than live without her lover, she hanged herself in the attic room where had met. It is now named Lily’s Room and one of the most popular rooms in the inn.

Many people have reported seeing Lily. They usually see her from the back. They seldom her face. She is known for playing around with the female guests’ makeup and jewelry, perhaps since she had no such amenities to make herself attractive for her soldier. Guests, especially in Lily’s room, often tell of being touched or gently kissed at night while in their beds. Psychics who investigated the inn found lipsticks they deliberately left on a dresser unmoved while other lipsticks from the investigators’ private bags mysteriously moved to other places. They did not see Lily but recorded disturbances and sounds in “her” room. They did see a slightly built Hispanic male and an older man dressed in a tri-cornered hat. No one has any explanation for these apparitions. 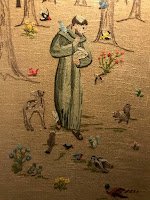 Bev Lonergan, who works at the St Francis, told me of an unusual experience. She was working the front desk on the night shift. “I got off at 10:30 one night and was sitting downstairs figuring out the books. I felt the hair on the back of my neck and arms start to stand up as if I had received a fright. When I looked up there was the soldier! He was short and was wearing a bright red uniform coat with brass buttons, just leaning against the wall with his arms folded. He was looking straight at me and smiling. Then he was gone.” She got out of there fast and left the books for the next day.

Bev also says she has frequently glimpsed Lily but always from the back as the phantom girl hurries away from her. She hopes that “One day Lily will trust me enough to show her face.”

Haunted Deep South is written by travel writer Cheré Coen, author of Haunted Lafayette, Louisiana by The History Press. She writes the Viola Valentine paranormal mystery series under the pen name of Cherie Claire. Her next book in the series, Give Up the Ghost, comes out Oct. 13, 2019.


Posted by Louisiana Book News at 2:21 PM No comments:

Elvis has NOT left the building

We love Shreveport for its haunts, and now we have one more reason to visit. 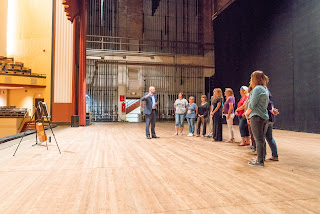 The Shreveport Municipal Auditorium, which has seen numerous paranormal investigators visit the 1929 building for its assemblage of ghosts, will host five paranormal-themed guided tours during October. Tickets are now on sale for the 90-minute tours, which will be held at 6:30 p.m. Fridays in October (including Oct. 4, 11, 18 and 25, 2019) as well as Halloween night.

As for Elvis refusing to leave the building, we think Elvis would have made it home to Graceland and not the site of his early career, but we could be wrong! Regardless, someone is haunting the building. It’s been investigated by paranormal teams like SyFy’s “Ghost Hunters” (June 12, 2013 episode) and Discovery’s “Ghost Lab.”

Check it out yourself. Tickets to the haunted tours are $20 per guest and must be purchased in advance by visiting the “Tours” tab at www.shreveportmunicipalauditorium.com.

Be sure to walk across the street to Oakland Cemetery, which has ghostly stories of its own, including young Cora Lee Wilson whose grave constantly falls apart, the bricks routinely pushed out — from the inside!

For more information on the ghosts who haunt other sections of Shreveport, read our past blog post here.

Haunted Deep South is written by travel writer Cheré Coen, author of Haunted Lafayette, Louisiana by The History Press. She writes the Viola Valentine paranormal mystery series under the pen name of Cherie Claire. Her next book in the series, Give Up the Ghost, comes out Oct. 13, 2019.

Posted by Louisiana Book News at 9:42 AM 2 comments: 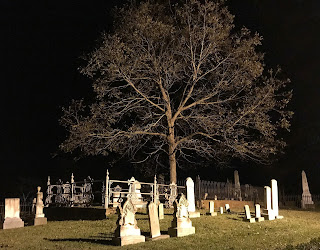 This story was first published on Weird, Wacky and Wild South blog and has been edited for this year’s event.

Tickets go on sale every year on Aug. 1 for the annual Angels on the Bluff, the long-running candlelit tour of the Natchez City Cemetery. And folks in the know have this date circled on their calendar — this year Nov. 7-9, 2019. Tickets sell out quickly and it’s easy to understand why. Local actors and musicians in period costumes channel historical figures from beyond the grave — and the town has its fair share of colorful people who have passed.


We visited in 2017 and there were 16 shuttles the evening we participated, meaning 16 busloads of ticket holders being shuttled from the Natchez Visitor’s Center to the cemetery on the north side of town. We were the 6 p.m. group and we filled the school bus to capacity. Once at the cemetery, we followed our leader dressed in a jacket with reflector tape and holding a flashlight and in the distance were two other large groups already in progress. The trails we were meant to follow were lighted by luminaries and several of the live oak trees were lighted from below, casting eerie shadows about. Some of the angels atop gravestones, including the famous “Turning Angel,” (more about her later), were also illuminated and stood out in the darkness as if serving as our protector.

First up to tell her story was Katherine Grafton Miller, the founder of the Natchez Pilgrimage, who described how she saved the town with tourism in the 1930s. We then met cabinetmaker Robert Stewart who once also served as one of the city’s undertakers.

L.S. Cornwell, a local merchant and brief publisher of The Eagle newspaper in Concordia Parish, Louisiana, was played by an Angels veteran, a humorous actor accompanied by the dead man’s wife, who also gave a humorous tone to the storytelling.
Lilly Ann Eliza Granderson was an inspiring story, telling how she rose from house and field slave to a woman who operated a secret school where she taught other slaves to read and write.

Many people know of Florence Irene Ford because of her unusual grave. Florence’s mother comforted her in life when thunderstorms hit — she was deathly afraid of them — so when she died at the young age of 10, her mother built a stairway into the ground and a window next to her coffin so that she may visit Florence and comfort her when storms arrived.

Back to the Turning Angel. One of the night’s storyteller was John Carkeet, a pastor and undertaker who was the 11th victim of the 1908 Natchez Drug Company Explosion. The downtown building exploded and burned due to a gas leak and five young women were among the casualties. Their bodies are buried beneath the Turning Angel and the angel watches over them. It’s said that when you walk near the statue, the angel’s eyes will turn and follow you.

Other fun aspects of the night included a fiddler at a Civil War soldier gravesite, reliving the dancing life of Lillie Vidal Davis Boatner and a dance around a campfire by gypsies.

Sound interesting? Mark your calendar for Aug. 1 and nab those tickets fast. All proceeds benefit the cemetery. For more information on this historic and beautiful cemetery, visit natchezcitycemetery.com.

We loved visiting Columbus, Georgia, for its great food and live music scene, interesting museums such as the Coca-Cola Space Science Center and rafting the rapids of the Chattahoochee River. Come fall, the town about an hour and a half southeast of Atlanta offers a few haunts.

According to my trustworthy tourism friends, Columbus has about seven documented haunting spots. Two on the top of the list is the historic Springer Opera House, where a ghostly figure hogs the spotlight, and Port Columbus National Civil War Naval Museum, where books fly off the shelves, among other paranormal happenings. You can visit both through special tours that occur in the fall.

Columbus Eats Food Tours will take visitors through the Springer Opera House, which dates back to 1871 and is one of only seven U.S. theaters with a National Historic Landmark designation. Lots of actors have crossed this stage, some perhaps refusing to leave. The Columbus Eats Food Tours relate these stories of the haunted theater, including discussing the Crybaby Bridge, the House of a Thousand Cadavers and more in 1.5-hour tours conducted with minimal lighting. Some children may be uncomfortable so you might want to leave little ones at home.

Haunted Museum Tours at the National Civil War Naval Museum include a "Ghost Host" who introduces spirits of the Civil War Navies and paranormal investigator and author Faith Serafin of the Alabama Ghost Hunters highlights experiences from previous investigations. The tours are not recommended for children under 13. Upcoming Haunted Museum Tours begin at 7 p.m. Sept. 20, Oct. 4 and Oct. 19, 2019. Grab them quickly for tickets sell out fast; call (706) 327-9798.

While you're at the Naval Museum, don't miss a chance to see the C.S.S. Chattahoochee, a massive steam and sail gunboat damaged in Florida and brought to Columbus where she was sunk by her own Confederate Navy to ward off Union infiltration. The salvaged pieces make up quite a ghost ship.

Posted by Louisiana Book News at 12:50 PM No comments: